Our injection molding company spends a lot of time thinking about the future of plastics and what kind of innovations are on the horizon. However, we wanted to take an opportunity to look at how we got to this point of relying on plastics for everything from automobile manufacturing to medical supplies. While plastics are relatively new in our history, once in development, new inventions and innovations happened quickly. This is part one of our two-part series on the history of plastics where we look at the first man-made plastics and their uses.

Humankind has been tinkering with natural materials since the dawn of history to create what can be considered a pre-cursor to plastics. Natural rubber derived from the rubber tree in Mexico and Central America was used to make balls, toys, and other items that date back 3,000 years. Cellulose was separated from wood and plants and used to make paper.

In the 1840s, Charles Goodyear and Thomas Hancock both took out patents for “vulcanised” rubber which was naturally derived rubber that was treated with sulfur to make it stronger. This development lead to manufacturing water-resistant clothing like raincoats and rain boots as well as bicycle tires (and later, vehicle tires).

However, it was cellulose that would lead to the biggest breakthrough and the first modern plastic.

In 1856, the first patent was granted to Alexander Parkes for his material called parkesine, the first man-made plastic. Parkesine was cellulose that had been treated with nitric acid to create pyroxillin which was then dissolved in alcohol. This transparent, flexible material could be molded, shaped, and colored when heated and cooling to a hard, durable material that could be used in all types of uses.  As an affordable substitute for ivory, parkesine was used for buttons, combs, and handles for cutlery.

American inventor, John Wesley Hyatt, saw an opportunity to improve upon parkesine by adding camphor to make it thinner and more malleable. This updated material was named celluloid and was so versatile due to it’s ability to be molded, shaped, drilled, polished, or pressed into impossibly thin sheets, it was used for everything from piano keys to a substitute for linen in clothing. The Eastman Company went a step further when they discovered how to process the celluloid further to create a film used for photography and  motion pictures. 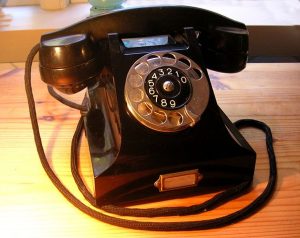 While parkesine was the first man-made plastic, it was derived from a combination of natural cellulose and synthetic materials. In 1907, Leo Baekeland, a Belgian-American chemist, developed a 100 percent synthetic material called polyoxybenzylmethylenglycolanhydride, a thermoset material formed by the reaction of phenol and formaldehyde. It was patented as Bakelite in 1909 and was a game changer due to its heat resistant properties, electrical nonconductivity, and ability to be shaped into almost anything but was hard and durable once cooled.

Bakelite was used for everything from radio and telephone casings, kitchenware, clocks, jewelry, toys, and even firearms and was incredibly popular all the way through World War II. Newer plastics invented in the 1930s that were easier and more affordable to produce superseded Bakelite-type plastics by the late 1940s.

Thermoplastics Arrive on the Market

After World War I came to an end and Bakelite was experiencing rapid growth, chemists around the world were looking for ways to improve plastics and discover new types of polymers that were easier and less expensive to produce.

The first thermoplastic to be manufactured was polystyrene, a long-chain hydrocarbon that was lightweight, water-resistant, and buoyant. While it was originally manufactured in 1931 as a replacement for zinc, it quickly became a replacement for rubber or used in a blend of rubber, creating styrene-butadiene rubber.

While polyvinyl chloride (PVC) was originally invented in 1872, it wasn’t commercially produced until the late 1920s when the B.F. Goodrich company discovered a method of adding plasticizers to the brittle, hard material to make it more flexible and easy to produce. This innovation led to rapid growth, being used for water-resistant coating on fabrics, being used to make canvas, and was even used to insulate wiring.

At Advanced Plastiform, we rely on the work and knowledge of those inventors and developers to build a foundation that we have built on. We use a wide variety of thermoplastics to create durable, long-lasting custom plastics with a fast lead time and low per-unit prices.

If you need accurate, high-quality custom plastics created through injection molding or thermoforming, we can help. We work with all types of industries in the Southeast and Mid-Atlantic, including North Carolina, Pennsylvania, Maryland, Tennessee, Georgia, and Virginia. To learn more, reach out to our team today.

Please contact us today by calling 919-404-2080 or filling out our form below to discuss your custom plastic manufacturing needs.